In this video, I provide a complete tutorial on how to assemble your own stair lighting, featuring block diagram, code overview, testing and final layout. Code and schematic can be found on this page.

The stairs at night were really dark. It was bad enough that we had to put lights next to it. However, these lights shined in your face and not the stairs. I wanted to light up the actual steps. I really thought the German video was cool, so I aimed for that animation as my goal.

I chose the ATmega328P firstly because it was on the Arduino. It had the hardware SPI, a ShiftPWM library and good enough speed. If I was mass-producing these, I would probably have chosen a microcontroller with less pins.

Update 2014-11-09 Since the time of this post there has been a new product in the Adafruit store called a “laser break beam sensor”. If the delay on the motion detectors is completely intolerable then you could try one of these: http://www.adafruit.com/products/2122

For output devices, it was clear that I wanted to use the strip LEDs vs the regular point LEDs. I saw some previous implementations like this one and gawked because they didn’t even light up the stairs, only the walls next to the stairs! 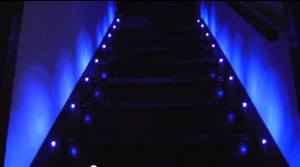 This person lit up the wall.

Code that runs on the microcontroller may be found on Github: https://github.com/androng/Shift-stairs

Here is a video to help you run the code:

I laid out a board but never had it printed. It should be completely functional, but have a look before you print it, especially the minimum distance between traces etc.

EDIT 2014-10-28: I have finally tested the board and it almost works! This was one of my first PCBs and I messed up in my definition of the 2N7000. As a result, you have to solder in the transistors backwards in version 1.0 of the PCB. In version 1.1 this is fixed.

The small rectangle on the left side is a matching through-hole resistor for the photoresistor. I recommend populating the LED headers at the bottom with 2×40 male headers and using black female jumper wires to connect the LEDs. Or you could modify the board to make screw terminals. 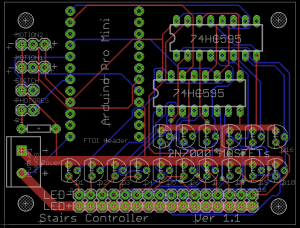 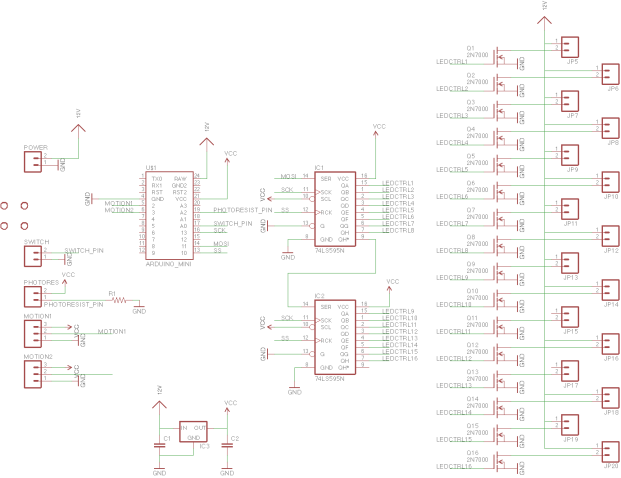 PCB with connectors. I originally wanted to use the red connectors but I didn’t realize they were too thick, so now I recommend the black connectors on the right side.

When you solder everything correctly, this should happen:

Tools:
1x USB-to-UART
Soldering iron
Heatshrink and lighter – use the smallest size and cut into 3 pieces each
Wire stripper
Screwdriver

I recommend buying 2 or 3x everything in the “PCB parts” section in case you decide to start over.

How do I adjust the number of steps? Only nine of the steps turn on.

One of my lights doesn’t turn on/off or it flickers.

If it’s just one light then it’s a hardware problem. Try replacing the transistor that controls the flickering light or the light itself.

My lights stay on and never turn off.

One of my motion detectors does not trigger or has many false positives.

If the bottom stairs sensor does not work well, first I suggest swapping the top and bottom sensors to make sure you don’t have a bad sensor. Same behavior after swap means the wire to the bottom sensor needs to be thicker or the bottom of stairs need an environment change to accommodate the sensor, like a reflector on the other side of the step. Different behavior after swap means you have a bad sensor.

My choice of female headers as connectors for the LEDs was really bad. The headers are very secure, however all the wires are exposed and it is hard to place one in the middle. Other than that and the point-to-point soldering, I really did not have any problems.

Like stated in the video, I would have improved these things:

I accomplished the objective of lighting up the stairs as well as adding some extra features like daylight detection. After a long time, I finally completed the documentation and edited together the film I captured so long ago! I feel accomplished.

People like you and me have succeeded in banishing the darkness! Publish a video to YouTube, link to it in the comments, and I will showcase it here. Include a link to this page in your video.

562 thoughts on “How to Assemble Stair Lights”